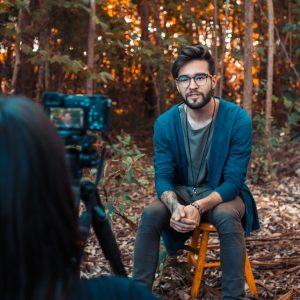 There are cases where a dramatised, scripted or highly creative video will be the ideal choice for your goals and target audience. However, there are situations where a talking-head interview can be the best option for the requirements of your video.

In most cases, talking-head interviews are produced using the prompted interview style. The outcome is a simple, but effective, immediacy of one individual conversing with another and, as social beings, we are used to making sense of our world in this manner.

So, how do you prepare for a prompted interview?

If you have been asked to participate in an interview for a video, the first thing that will cross your mind is how to be ready for filming. In this read, we are going to discuss a few points that can help you prepare and ensure things go smoothly in the big day.

This may sound counter-intuitive, given we are giving advice on how to prepare for an interview but trust us on this one. Yes, it is true that most situations call for proper preparation and rehearsal in order to yield the best results, but a prompted interview is not one of them. Rehearsed interview responses do not give natural results. You will look and sound stiff and the listeners will not be convinced by what you have to say. The audience tends to be pretty sensitive to non-genuine responses on video and rehearsed answers will usually be perceived as lies.

If you’re in the hands of a great production team, the prompted interview will flow in a conversational manner and so, your responses will be more spontaneous and natural. It is imperative that you trust the interviewer and so, do not be thrown if the manner of questioning is not what you expected. It’s advisable to just go with the flow.

4. Do Not Be Too Careful and Just Let Go

Prompted interviews are often steered towards the intended message, but they can sometimes give gems of insight that nobody expected during the pre-production stage. These aspects of your story are usually the elements that give your video a unique personality and tend to be moving or persuasive. They produce moments that are the most remembered by the audience.

Smiling whenever you start or complete saying something will make the interview more engaging for the audience. In most nations, studies show that if you smile, you become more trustable and this means the audience will be more inclined to believe whatever you say.

When under pressure to perform in front of a camera, you may become nervous and scared of pausing which results to you talking more quickly. That’s because you do not want to appear as if you are at a loss of words. In most cases, speaking slowly makes a good impression on the audience.

More often than not, we get the best footage during the conclusion of an interview session. That’s because the interviewee feels the task is done and so, they start talking freely from the heart. In most cases, what you think is an over-emotional manner of expressing yourself on camera usually comes out more subdued than you think. As such, it’s advisable to show some genuine passion in the session and this is bound to make the interview believable and more engaging.

Tips For Preparing For a Prompted Interview